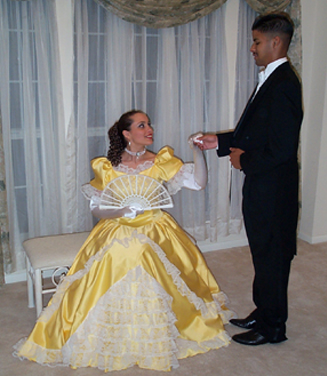 Lanceros, a traditional dance from our "Bailes de Salon" (Ballroom Dances), came to Puerto Rico via Spain in the second half of the 19th century. It was a popular dance in the salons of elite, agricultural landowners (hacendados) with cultural ties to Spain. The roots of this dance originated in Ireland as a dance called Lancers Quadrille (or Lanciers in some countries). It was invented by Dublin dancing-master John Duval and was based on the Quadrilles danced in France in the late 18th and early 19th century. (Although, Englishman Joseph Hart is historically cited as the first creator of Lancers in 1819.) Variations of Lancers, found in many European and Latin American countries, made its way to Puerto Rico starting with its introduction to Paris from Ireland in 1846, followed by the traditional route of other European dances, from France to Spain, Spain to the Carribean.

In Puerto Rico, Lanceros was traditionally danced by 8 to 16 couples in the formation of a quadrille. The ladies were elegantly dressed in ballrooms gowns and fans, men in romantic white tie-and-tails. A "Maestro de Baile" (a caller, basically) led the couples through set choreographies made up of five parts or musical variations on Lanceros (the Reception, the Balance, the Rose, the Visit, the Chains) which incorporated the four basic formations that make up Lanceros (balance, cierre, rosa, and cadena).