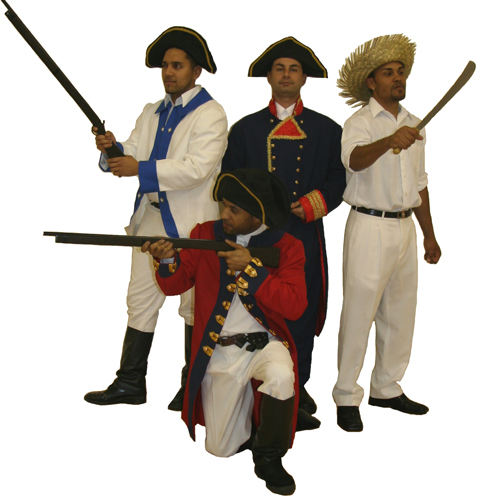 
History behind the Musical
by Dr. Tekina-eiru Maynard (2005)

On Dec 11, 2005, the Puerto Rican Folkloric Dance performing company of dancers and musicos were proud to debut our original mini-musical, written by PRFDance Director Ana Maria Maynard, that told the story of the heroism of the Puerto Rican people during the British Invasion of 1797. We hope you enjoy reading this history behind our production. Historical references are included below, including research contributed by Professor Juan A. Guisti Cordero, Univeristy of Puerto Rico. Photos from that show coming soon!

The British Invasion of 1797

On April 17, 1797, urgent smoke signals from Loiza warned the San Juan Forts of the arrival of the British fleet. Led by General Ralph Ambercromby, the invasion brought more than 7000 British soldiers in over 60 ships for what the British thought would be an easy victory -- the conquest of Puerto Rico. Puerto Rico was in no way equipped to defend itself against such a force: the majority of the trained spanish soldiers and arms had been sent off to a campaign in Santo Domingo. There were less than 200 soldiers left guarding the fort!

The British fleet anchored off Cangrejos Point, in Pinones, a few miles east of the walled city of San Juan. 3,000 troops landed to take control of Cangrejos and surround San Juan by land. But to their surprise, the British discovered Puerto Rico was no easy prey. Advance rumors of the impending invasion gave the energetic Governor Ramon de Castro time to mobilize the standing troops, summon the native militia, and call on every able bodied citizen throughout the island. The British discovered the heroism of the Puerto Rican people -- 20,000 in all -- farmers, fisherman, ordinary men and women who came from the mountains, coastal towns, and cities to save the island with whatever they had, machetes, lances, farming implements!

For two weeks the battles raged on. Centuries of construction and repair of San Juan's fortresses provided the capitol city with a massive stronghold. Relentless fire from the city's forts barred the British from scaling the city walls. The militia prevented them from reaching the capital on foot, while armed citizens kept them from food supplies.

On the morning of May 1st, instead of being greeted to the renewed sounds of enemy fire, the Puerto Rican people woke to an eery silence. The British had abandoned their camps during the night in what seemed a hurried retreat that left large amounts of equipment, artillery and munitions, horses, beds, rations and cookware behind. Following their trail, the Puerto Ricans found the British embarking on their ships in great haste.

A popular legend by Coll y Toste tells of a miracle that caused the British retreat: on the night of April 30th the Bishop of San Juan called the whole city to come with lighted candles to participate in a night-long prayerful procession through the city to ask St. Ursula and the Seven Thousand Virgins to save Puerto Rico. By midnight the British took the ringing of church bells and growing lights in the city for massive reinforcements from the countryside, and returned to their ships in a hasty retreat.

In recognition of the peoples' heroism King Carlos IV bestowed the Seal of Spain on the City and the people of Pinones were rewarded with ownership of the land they lived on. The herosim of the Puerto Rican people during this invasion was historic, not only because they saved Puerto Rico from a takeover that would have completely changed their history. But more importantly because this invasion formed a Puerto Rican conscious collective -- it was the moment in history when the people began to identify the island as their own, "Puerto Rico, Mi Patria."

We would like to give special thanks to Juan Giusti Cordero, Professor of History at the University of Puerto Rico, and Nelie Lebron Robles of Paracumbe who shared many insights into the period as well as rare historical literature. Here is our full list of references:
Last but not least, "un gran saludo" to our friends, The Fixed Regiment of Puerto Rico. Our PRFDance Director is proud to be included as one of the official "Damas del Regimiento Fijo de Puerto Rico."

We hold the banner high for Puerto Rico everyday!
Thank you in advance for your donation of any size!!